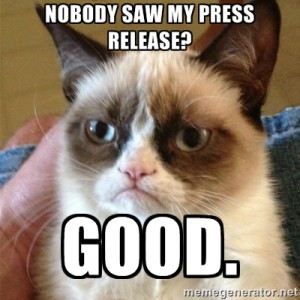 The quickest way to kill a relationship with the news media is by sending a bad press release. In addition to good grammar, a press release should be newsworthy and pique a reporter’s interest. Keep in mind, that a reporter’s mailbox is flooded with press releases from other companies and non-profits on a daily basis. Therefore, you want your release to stand out from the bunch.

Here are five things NOT to do when writing a press release.

It’s true, first impressions really do last a lifetime. Because the headline is the first thing reporters will read, it’s the most important. If you do not start out with a strong, attention-grabbing headline, your release will mostly get thrown into the recycle bin.

Drag out the story

Like most of us, reporters are busy people. The last thing they want to do is read the entire release to get to the story. Reporters should be able to read the first sentence of the release and know exactly what it is about. Get to the point!

A press release that lacks structure will not be taken seriously. Here’s a little bit of housekeeping: a press release should be no longer than a page. If you have babbled into the second page, start over. The words “FOR IMMEDIATE RELEASE” should be at the top of every page. And while some like to write the headline in bold or capital letters, I try to stick to the AP Style guide. I capitalize the first word and nouns, but no bold. Underneath the headline you should include a catchy subhead. This is often italicized.

One of the most common press release writing mistakes is not including a message. Before you even begin typing, ask yourself what are you trying to get across. It can be hard for a PR professional to put their ego aside and write something the news media will actually care about. For example, your company is launching a new product, who cares? Explain how this new product is going to benefit the consumer. Think like a journalist.

This, I cannot emphasize enough. Proofread your release a couple times and let a co-worker look it over too. One single mistake can deter a reporter from publishing your release. More important, a grammatically correct press release will make a good impression of you and your company (recall what I said about impressions).

The purpose of a press release is to inform the news media and the industry-at-large of your company’s latest developments. This includes product launches, new hires, announcements, you name it. The press release has many benefits. But, remember, what may be newsworthy to you may not be newsworthy to the reporter. Always avoid wordy sentences and corporate jargon. Be succinct, and get to the point!