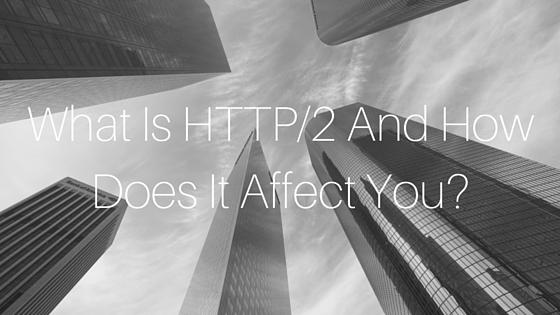 There are some big changes coming to the web. Things are about to get faster with the introduction of the newest HTTP protocol: HTTP/2.

It’s been over 15 years since the last update and so much has changed in that time. Technology has gotten more sophisticated, consumers demand more from their web experience, and sites have only gotten heavier and speed has become one of the most important factors for UX.

Servers are already beginning to adapt to HTTP/2. As such, it’s time that we begin to learn more about it and begin to understand what we need to know about this very significant change to the internet.

HTTP/2 is an updated version of the Hypertext Transfer Protocol (what we know as ‘HTTP’ at the beginning of web URLs) and is partially based off of Google’s SPDY protocol, which was developed to help improve browser speed and performance when loading websites.

History of the Hypertext Transfer Protocol

The Hypertext Transfer Protocol (otherwise known as ‘http://’) is the protocol that establishes the connection between a user’s browser and a server’s host. HTTP was first documented in 1991 which led to the creation of HTTP/0.9. The current version, HTTP/1.1, was introduced in 1999, which means that an update was going to be coming down the pike sooner rather than later.

How Does This Change Affect You?

Whether you’re a simple user or a web developer, this infrastructure update is something to be excited about. This protocol update will create a faster and more functional browsing experience for users. Since 1.1’s inception, sites have changed dramatically over the 15-plus years of use, and now consist of more images and data than they did when 1.1 was first introduced, which affect the loading time of pages. HTTP/2 will be able to adapt to what we need from a user’s and developer’s prospective.

While there are some great resources that go into the technical nitty-gritty of what is changing, for brevity’s sake we’ll be giving you a simplified overview of the important changes coming with HTTP/2.

Multiplexing is the ability for the connection to send multiple messages at the same time with one TCP connection. This will reduce the required time to process the requests that are sent and received, improving UX by speeding up site load time.

Before HTTP/2, only one request could be sent and handled at a time, which led to a series of requests on the host which slowed load times. Additionally, some page loads would require multiple connections, which could slow down load times even further. HTTP/2 solves both of these challenges by allowing multiple requests to be handled at once through one connection, resulting in faster connections, improved latency, and faster load times, which will have immediate results to user experience.

Server push is all about saving time, with the server analyzing the client’s next request, sending additional information, even before they’re needed. What this means is, there won’t be any more waiting for the HTML of a page to load until the browser requests the Javascript, or images, or video, etc., as HTTP/2 will allow the server to make faster transmissions by sending “push” responses. Web page load will now be proactive instead of reactive.

Prioritization is about understanding the importance of each element on a web page and transferring the most import requests first. It’s the browser that suggests how the data is to be prioritized, but the final decision on is made by the website’s host server.

So When Does HTTP/2 Roll Out?

Well, good news, it already has. While HTTP/2 might not be the standard HTTP protocol yet, it’s gaining interest month by month. Currently, 6% of all websites are using HTTP/2. In fact, 13.5% of websites that are in the top 1000 used sites in the world are using the new protocol.

What Should I Do?

Nothing, there is no need to do anything to prep you from a user’s point of view, as the change has already started on several sites. Additionally, HTTP/2 is backwards compatible with 1.1, so users won’t notice any difference except for the speed.